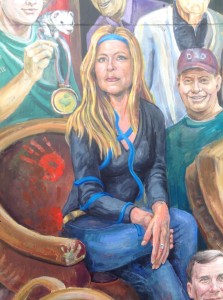 Dora’s dedication to and 15 years of activism efforts addressing the issues of sexual and domestic violence through poetry, performance and activism was honored in 2012 by her image being painted into the place previously occupied by the image of former Penn State football coach and convicted sex offender Jerry Sandusky in the Inspirations Mural in State College, PA, where Penn State is located. Dora’s image was painted into the chair, which had been empty since November 2011 when the Sandusky scandal broke, after the jury convicted Sandusky of 45 of 48 charges on June 24, 2012.

Read Dora’s statement to the press responding to her image replacing Sandusky’s by clicking here.

My family moved from Danville, California to West Chester, Pennsylvania the summer before I began…