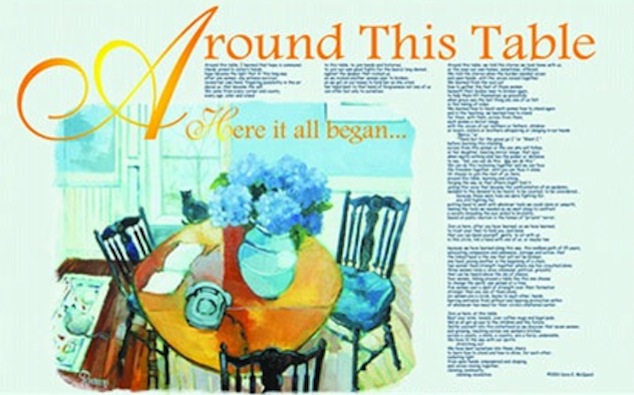 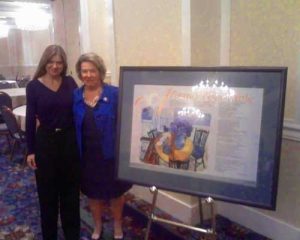 Today is the anniversary of the unveiling of the poem, Around This Table, that I was commissioned to write by The Pennsylvania Coalition Against Domestic Violence (PCADV) to honor their 25th Anniversary in October of 2001. Susan Kelly Dreiss was the catalyst for the formation of PCADV, calling a group of women together in her home for a weekend meeting that resulted in the establishment of the coalition, which was the FIRST statewide coalition in the history of the United States.

I was honored by the request to write this poem and even more honored to have that poem developed into the poster campaign to raise funds for The Memorial Fund to honor women whose lives are lost to domestic violence. The poem, in this poster form, was presented to Susan after I read it for the first time publicly during the 25th anniversary celebration in Harrisburg, Pennsylvania, where PCADV is located.

Susan and the founding members of the Pennsylvania Coalition Against Domestic Violence represent the pioneering spirits and engaged advocacy that has driven the domestic violence movement forward in this country. Their work, over those first 25 years, which led to the first statewide coalition against domestic violence in the United States, has impacted:

Susan’s dedication and inventive resourcefulness has been an inspiration to me since our first meeting in 2001. She wrote the first domestic violence law in the history of Pennsylvania, helped write the Violence Against Women Act and was a founding member of the National Network to End Domestic Violence. In 2001, Susan requested a recording of me reading my poems from my first book, the scorched earth, to use in trainings she was doing around the state, which led to the compact disc companion of that book, the scorched earth: spoken being released in 2002. A year later, she wrote a letter in support of my nomination for the Pennsylvania Governor’s Pathfinder Award, which I received in 2003. Susan and I then traveled to Wilmington Delaware to offer the keynote address together at the 10th Anniversary Celebration of The Delaware Coalition. When Susan retired from her position as the Executive Director of PCADV in October 2008, a post she served for over three decades, the Coalition flew me back to Pennsylvania to surprise her at her retirement party. Susan gave her retirement speech from the podium with the framed poster of my poem standing on an easel beside her. This photo of us together, next to the poster of Around This Table, was taken shortly after that last speech of hers as she motivated us all, yet again, to keep working together to end the violence that marks the lives of far too many people.

My deepest gratitude goes to Susan for her inspiration, fine example of empowered activism and for her support and mentorship over the years, as well as to all of the members of PCADV and the many women and men working daily around the world to end domestic violence and to empower victims and survivors to reclaim their lives, one life at a time.

The poster is available through the www.pcadv.org website by clicking here.  All sales are donated to the Memorial Fund to honor women lost in domestic-violence related homicides.