One Billion Rising is the bold vision and revolutionary campaign created by Eve Ensler, author of The Vagina Monologues, to bring together One Billion people to rise and dance on Valentine’s Day all over the world to demand an end to the violence against women and girls. The United Nations statistics show that one in three women will be raped or beaten in their lifetime, with an estimated One Billion women experiencing such violence. As Eve Ensler stated, one billion women violated is an atrocity. One billion women dancing to end the violence is a revolution.

And so, that revolution began on Valentine’s Day 2013 and continues again this year. Last year, women and girls and the men who support an end to the violence danced together in 207 countries around the world, creating the largest mass event ever held to address violence against women. This year is the second peaceful, flash mob dance strike uprising growing in both size and impact, with events happening in countries around the world, with the focus on the goals of Strike. Dance. Rise. 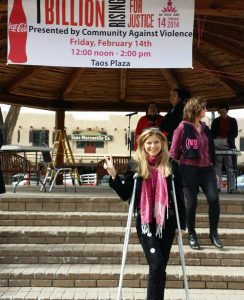 I was honored to have my work featured in the One Billion Rising event in my town of Taos, New Mexico, last year and this year I will serve as the closing speaker for the event. Please join us in the Taos Plaza at noon, Taos, NM for this year’s One Billion Rising. I’ll be wearing pink to honor my mother, who is also a survivor and who loves the color pink, even though it wasn’t the color of revolution when she first fell in love with it.

To find an event in your community, please check:
http://www.onebillionrising.org/events/#!/0/0/1/

To learn more about One Billion Rising and to get involved in planning for the 2015 event, please see: http://www.onebillionrising.org/about/campaign/

DORA HONORED AS ONE OF THE REMARKABLE WOMEN OF TAOS

Walk A Mile In Her Shoes, Taos