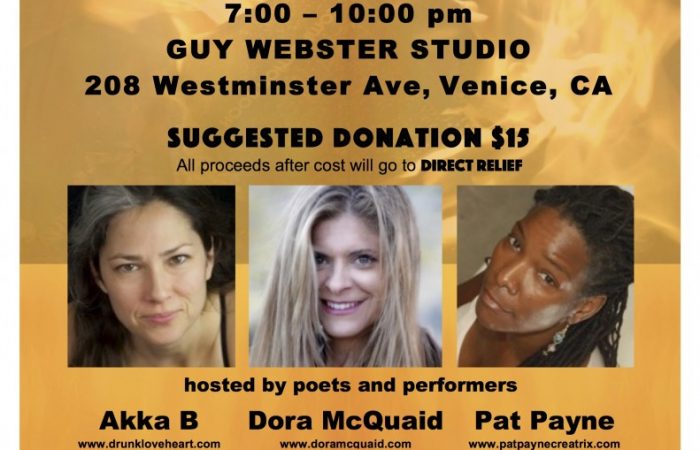 “I have been flame, fist, dance and spin…”
From Dora’s poem, Homecoming, in her collection of poems, the scorched earth.

As part of her current book and speaking tour, Dora will be in Los Angeles for several events during the first week of October 2015. She will be performing with performance poet and performance artist, Pat Payne, aka The Velvet Hammer, award-winning fiction writer Sandra Hunter and poet, speaker and teacher Akka B. Poet.

Dora co-founded The NeoSpinsters with Pat Payne in 2002 after a fateful meeting during the Taos Poetry Circus where Pat became the Heavy Weight Bout Champion, quickly adding performance poet Reina Prado to the NeoSpinsters to tour together internationally.  Sandra Hunter and Dora met at the 2011 A Room of Her Own Retreat (AROHO), when Dora won the New Mexico Woman Writer Fellowship to attend, and have waited four years to finally perform together. And Akka B. and Dora realized through social media that they share their love of both fiery living and exploring the wild.

We have several events on schedule:

Hosted by me, Akka B., Pat Payne, and with special guest Sandra Hunter

Please check back, as we have more events being added to this L.A. tour leg!