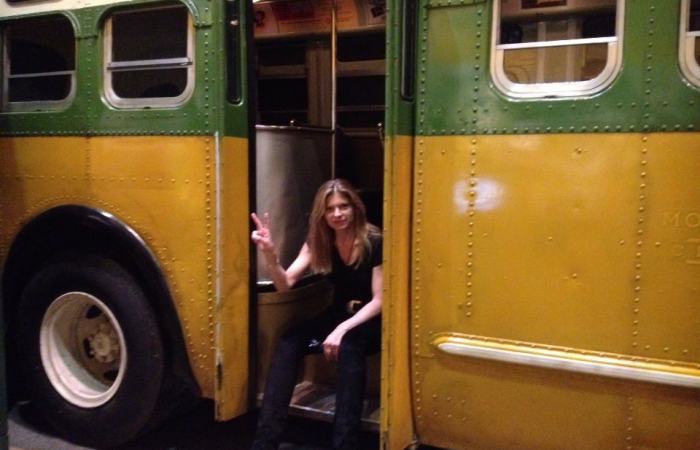 Today is the birthday of Rosa Parks, the woman known as The First Lady of Civil Rights and The Mother of The Civil Rights Movement and  in the U.S. for her refusal to give up her bus seat to a white passenger because of her race on December 1, 1955 in Montgomery, Alabama.

Rosa was arrested for Civili Disobedience for violating Alabama’s segregation laws for this act of defiance, which was consistent with her previous training as an activist and her holding the position of Secretary of the Montgomery Chapter of the NCAAP at the time of her arrest.  Despite her being fired from her seamstress position at the time of her arrest and her receiving death threats for many years afterward, Rosa became a national icon for resisting racial segregation and civil rights activism.

Today, in honor of the fierce courage, brave spirit and the example she offered of women rising, individually and together for justice and freedom, I celebrate Rosa Parks.

This photo was taken in May 2015 while I was in between events on my tour with my book, the scorched earth, at the National Civil Rights Museum in Memphis, Tennessee. Sitting on the steps of Rosa’s ACTUAL BUS at the National Civil Rights Museum moved me to tears for how her defiance was a moment of dignity and pure grace. Thank you, Rosa, for your service.

SAY HER NAME OUT LOUD
The link to this article, Her Name Was Reeva Steenkamp, written by Kat Lister for Huffington Post UK, was just sent to me and I had to take a moment to share it, with deep gratitude to Ms. Lister for her courage…
HEIRLOOM