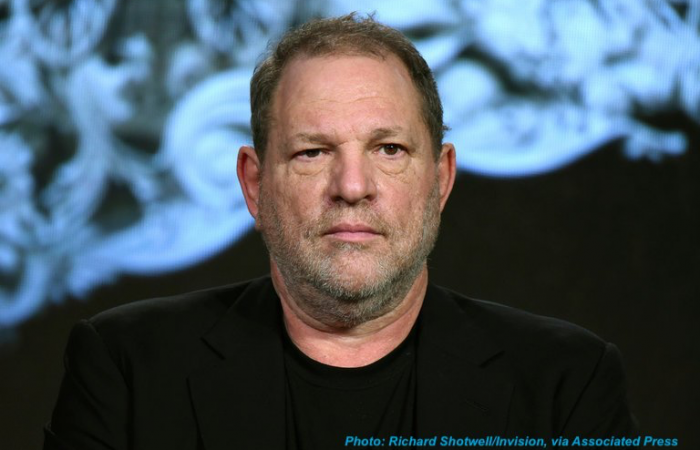 My Harvey Weinstein was a professor during my first semester in graduate school who stalked me, outside of my apartment at 2:00 AM, at the counter in the bakery I worked a full time job to avoid student loan debt while taking 16 credits of graduate courses to prove myself, who held my final course grade over me to try to force me to go along so I’d get the graduate assistantship I needed with the ‘A’ he taunted me with for his six months of dismantling my hopes, my dreams, my sense of self. But there were a few men in my department and in the administration, and a handful of women and men friends, at Penn State, who believed me and supported me and helped me make it through four years of an original, extensive research project on sexual harassment as Anita Hill and Clarence Thomas hit the newsfeed the Monday after my committee approved my research proposal and that rockstar research professor predator never got another academic job after Penn State let him go in the aftermath of me and six other female students coming forward.

I wish I could thank him, that predatory professor, now. He showed me the nature of systemic abuse and it’s impact and forced me to take that first step at the age of twenty-two that showed me the power of a woman’s voice, the power of women standing together, the power of knowledge and sheer determination combined and the grace that comes when we stand together. We need to stand together in the face of the Weinsteins of this world, women and men both. Justice can take so long to show herself, but when she does, we’re united in her presence, knowing we’re standing for the dignity of every woman who has been forced to question her dignity and her worth.

All those years ago, I thanked the people who held me through that ordeal, and I’m thanking you all again. You helped me to come back to myself, to find my dignity again and to begin to find my voice finally and to step into all that they offered. Each day is another step from those six months so many years ago and every woman taking a step against abuse and harassment is a woman changing the world right where she rises up and stands.

“TO BE HOPEFUL in bad times is not just foolishly romantic. It is based on…

April is National Poetry Month! And in honor of the monthlong celebration, American photographer Jill…