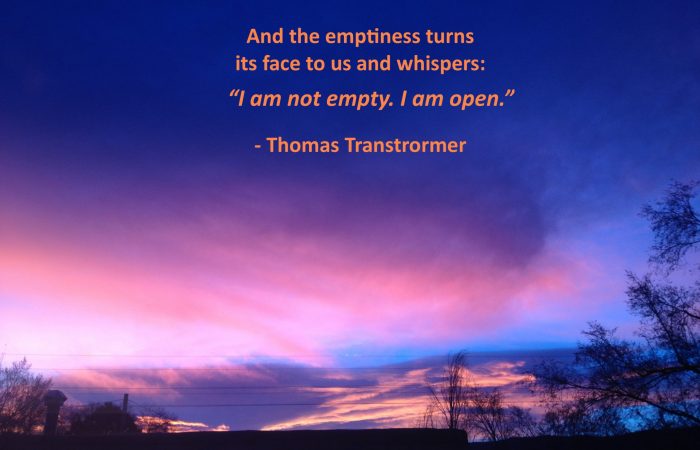 It’s not a sheltered world. The noise begins over there, on the other side of the wall
where the alehouse is
with its laughter and quarrels, its rows of teeth, its tears, its chiming of clocks,
and the psychotic brother-in-law, the murderer, in whose presence
everyone feels fear.

The huge explosion and the emergency crew arriving late,
boats showing off on the canals, money slipping down into pockets
— the wrong man’s —
ultimatum piled on the ultimatum,
widemouthed red flowers who sweat reminds us of approaching war.

And then straight through the wall — from there — straight into the airy studio
in the seconds that have got permission to live for centuries.
Paintings that choose the name: “The Music Lesson”
or ” A Woman in Blue Reading a Letter.”
She is eight months pregnant, two hearts beating inside her.
The wall behind her holds a crinkly map of Terra Incognita.

Just breathe. An unidentifiable blue fabric has been tacked to the chairs.
Gold-headed tacks flew in with astronomical speed
and stopped smack there
as if there had always been stillness and nothing else.

The ears experience a buzz, perhaps it’s depth or perhaps height.
It’s the pressure from the other side of the wall,
the pressure that makes each fact float
and makes the brushstroke firm.

Passing through walls hurts human beings, they get sick from it,
but we have no choice.
It’s all one world. Now to the walls.
The walls are a part of you.
One either knows that, or one doesn’t; but it’s the same for everyone
except for small children. There aren’t any walls for them.

The airy sky has taken its place leaning against the wall.
It is like a prayer to what is empty.
And what is empty turns its face to us
and whispers:
“I am not empty, I am open.”

Me opening the door to 2021, a little hopeful, a little hesitant, and a little…

As support for the peaceful Water Protectors at Cannon Ball, North Dakota continues to grow,…

First thought:  Today the daylight is 2 minutes and 19 seconds longer than yesterday.Second thought:  Rise up…