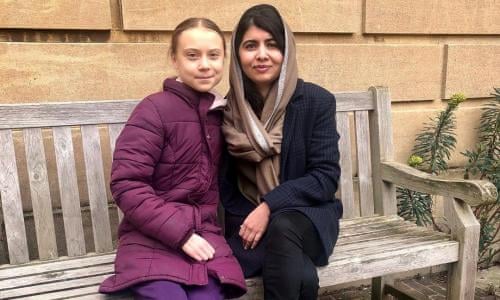 Two young women, who are already legends for their activism and leadership, met yesterday at Oxford University.

Malala Yousafzai, now only 22 years of age, won the Nobel Peace Prize in 2014 at age 16 for her Human Rights activism on behalf of education for girls after she was shot by Taliban extremists in her homeland of Pakistan. At the time of the attack in October 2012, when she was 15 years old, she had already gained international support for her activism, leading to the attempt on her life by a Taliban gunman who shot her in the head as she was riding her bus home from school. The attack led to international outcry against the Taliban attempt to assassinate Malala, as well as its restriction of girls attending school after the age of 15. She is the youngest Nobel Laureate in history. At the age of 13, after recovering from her injuries, Malala co-founded with her father, Ziauddin, also an education activist, the MALALA FUND to Work for a world where every girl can learn and lead.

Greta Thunberg, a 17-year old Environmental Activist from Sweden who has gained international recognition and support for her efforts challenging world leaders to take immediate action to address climate change. She began a global movement by skipping school in 2018 to stand outside of the Swedish Parliament holding a sign that simply stated: School Strike for Climate. By 2019, she was chosen as TIME Magazine’s 2019 Person of The Year and listed among its 100 Most Influential People in honor of her activism and leadership. Her TED Talk, The Disarming Case to Act Right Now on Climate Change, has been viewed over 5 million times since it was recorded at TED Stockholm in 2018.

Greta, en route to a school strike in Bristol, stopped by Malala’s class at Oxford yesterday, where Malala is studying studying politics, philosophy, and economics, when this photograph was taken. Malala posted the photo to her social media accounts with the caption: She’s the only friend I’d skip school for. This meeting of the two activists, as well as this photograph of them together, has already inspired millions around the world, as detailed in today’s (2/25/2020) BBC article, Greta Thunberg meets Malala Yousafzai at Oxford University.

These two young women are our future. There is so much work before us left to do, so many people to uplift, so many resources to protect, so many ways of rightful, balanced living that is in integrity with nature and its bounty, so many collaborations to be fostered, so many opportunities to rise together to do the work before us that binds hope to the future and to the generations to come that the meeting of these two truly legendary young women who are changing the world with their leadership, vision and dedication fills me with hope in the face of all of those possibilities. Despite the current challenges and the dark histories, hope is the future. And hope is power.

First thought:  Today the daylight is 2 minutes and 19 seconds longer than yesterday.Second thought:  Rise up…

Poetry and activism bring me back to Pennsylvania once again. I am honored to have…

OVER THE DAMN THRESHOLD

On the last night of each year, I sit quietly for a moment and imagine…