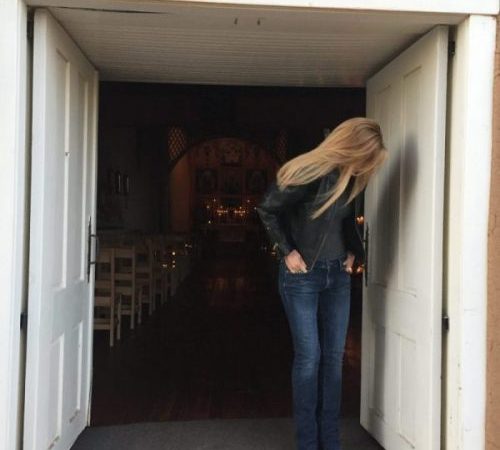 I woke before dawn, in that deep bell of velvet and cobalt, to the smell of smoke from distant fires surrounding us and the feel of the air cooler than it has been for many mornings in this season of scorch magnified by bone-dry drought. I’d been startled in my sleep, by the dreaming, enough to surface hard and fast and a bit breathless from both. Bared and alone, I lay here before the light came on, before the one raven called from the tree-line, before the dark receded and carried my dreaming away with it. I’d dreamt I was with my father, that he and I were getting ready to head out somewhere together, and I was trying on different shirts, having spun my hair up into a knot to get it out of my way as I did.

As usual, my dad was ready to go fifteen minutes early, jangling his keys as he waited for me in the kitchen, the smell of his aftershave more visceral than memory. I stood alone, fingering the frayed blue chambray work shirt left behind by a man I’d once loved, a split of color between the bank of my mostly black wardrobe, until I slid another black V-neck from the hanger and pulled it on. My father called from the hallway as he approached my room, standing in the doorway finally, raising an eyebrow at my bare feet. You about ready, Kid? he asked. Yes, I told him. Ten minutes. All I need to do is put my boots on, brush my hair. His other eyebrow raised up, his eyes a leveled blue, and I repeated myself: I promise, I said. I’ll be ready in ten minutes. He turned from the doorway and I heard his footsteps down the hall as I pulled my boots on, pulled my hair from its knot and felt it falling around me like a veil.

I snapped awake, my left hand caught in my hair on the pillow, my breath briefly beyond me. My father had come back to me, had come back for me again. I could smell his aftershave in the dreaming, as real as my old motorcycle boots or my hair caught up in my own hand. I don’t know where we’re going, but I’m almost ready. Ten minutes, I said. I promised. All I need to do is pull my boots on, brush my hair, and I’ll be ready to go.

The staff members of every nursing home across the United States are freaking heroes. They…

FEBRUARY IS THE CRUELEST MONTH, or SMALL ACTIONS THAT SUPPORT YOU BEING FULLY PRESENT

I think that T.S. Elliot had it wrong when he famously said that "April is…

THROWING LIGHT INTO THE DARKNESS

When I feel like the world is going a bit crazy, I go look at…