the scorched earth collection of poems and

the scorched earth is Dora E. McQuaid’s collection of poems about her journey from victimization to survivorship, through healing from a history of both sexual and domestic violence into empowerment and advocacy as an award-winning poet, activist, speaker and teacher. The audio disc companion, the scorched earth: spoken is a studio recording of Dora performing all 35 poems of the Expanded, Second Edition of this hard-cover collection.

Dora is pleased to offer this expanded, second edition, which includes:

The Foreword by Eve Ensler, award-winning author of The Vagina Monologues,
the scorched earth: spoken Audio Companion of Dora performing all 35 poems in the book,
7 new poems since the 1999 publication of the original version of this collection,
An in-depth, comprehensive Discussion and Study Guide designed for use in a
variety of settings to explore the issues of both domestic and sexual violence and
A listing of international Resources for Survivors of both forms of violence.

– Eve Ensler, from the Foreword she wrote for this collection, author of
The Vagina Monologues and In the Body of the World, Founder
of the international V-DAY Foundation and One Billion Rising.

“the scorched earth is a fierce, brilliant, naked book forged out of great suffering but everywhere flashing with rugged hope.”

– Andrew Harvey, author of The Hope: A Guide to Sacred Activism

“For the fifteen years that I have known Dora, she has been a heroic, inspiring survivor of violence whose work embodies the spirit of empowerment and social change. the scorched earth is beautiful…McQuaid brings you into her world and then takes you to a higher place. These are stories about finding freedom and celebrating life.”

– Susan Kelly-Dreiss, Co-Founder and first Director of The Pennsylvania Coalition
Against Domestic Violence (PCADV), the first statewide coalition in the United States.

“Dora McQuaid’s powerful voice, resonant with integrity and wisdom, speaks for so many. The poems in the scorched earth will carry you through brutality and betrayal to honesty and compassion. Pick up this book right now. Read it and give it to someone you love. As Dora McQuaid says, “This is how we save each other.”

– Mary Johnson, author of the memoir, An Unquenchable Thirst, and Board Member
and Director of Creative Retreats for A Room Of Her Own Foundation (AROHO)

“Tracing one woman’s pilgrimage from violence to grace – and victimhood to visionary power – Dora McQuaid’s superb collection earns her a place alongside Muriel Rukeyser, Katha Pollitt, and Susan Howe in the chorus of world-class poets. It reminded me of Rukeyser’s famous question: “What would happen if one woman told the truth about her life? The world would split open.” McQuaid has done this, beautifully.”

– Mark Matousek, Author of Sex Death Enlightenment and When You’re Falling, Dive: Lessons in the Art of Living

Poems from this collection have been used in outreach and rehabilitation programs for survivors and perpetrators of violence, law enforcement training and college and university courses. Dora self-published this book in 1999 and released the compact disc companion in 2002 at the request of the Cofounder and then-Director of the Pennsylvania Coalition Against Domestic Violence, Susan Kelly-Dreiss, for use in training programs she was facilitating across the state of Pennsylvania. The Pennsylvania Coalition Against Rape managed distribution of both the book and compact disc companion from 2004 to 2012 through their online catalogue.

The 2015 Expanded, Second Edition of the scorched earth is now shipping.

The Electronic Version of the book and the audio download of the audio companion will both be available in 2017.

As always, thank you for your support! 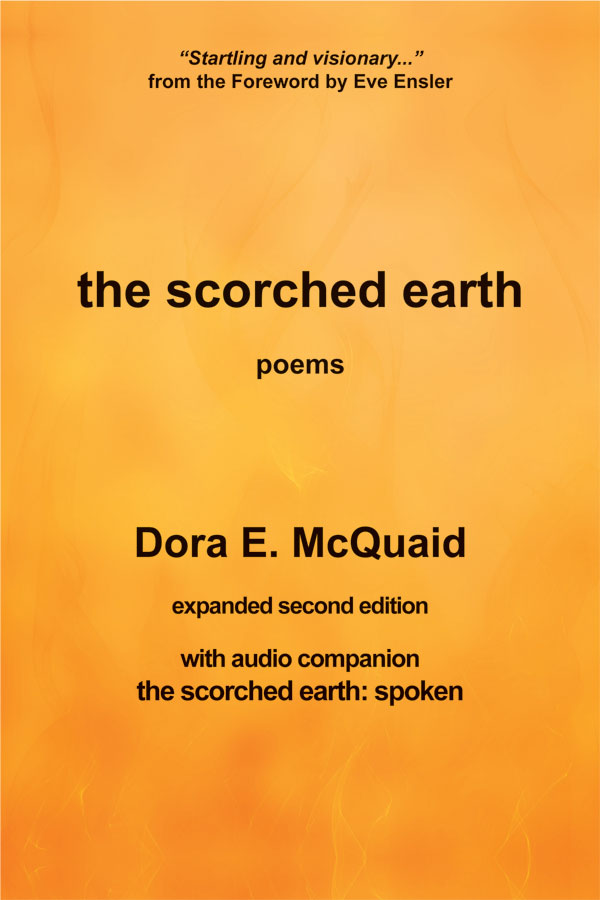