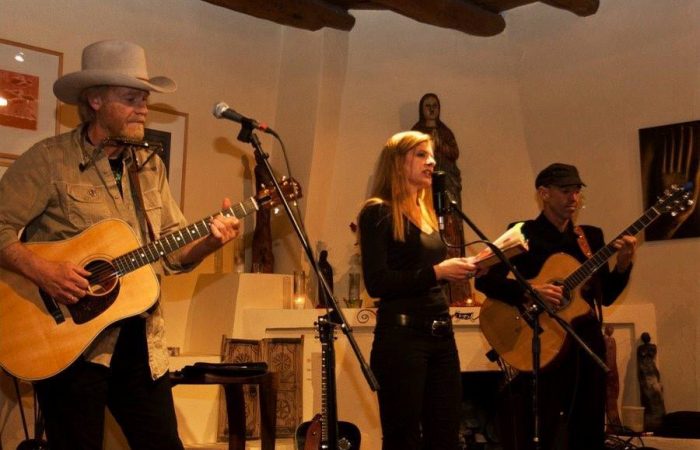 Dora joins Bob Livingston and Don Conoscenti for an improv performance, with Bob and Don playing 8- and 12-bar blues to Dora performing her original poems from her forth-coming collection along with poems by the great Sufi mystical poet, Rumi.

Bob Livingston has been touring internationally for almost 50 years, with over 25 international tours sponsored by the United States State Department, as an Ambassador of American Music, promoting cultural understanding through music. Bob is one of the key figures of the Cosmic Cowboy Outlaw and Progressive Country music movements that largely established the Austin, Texas music scene of the early 1970’s. A founding member of The Lost Gonzo Band with Gary P. Nunn, Bob has stayed with the band as it came to include Jerry Jeff Walker, Michael Martin Murphy and Ray Wylie Hubbard, among other musicians, over the 4 decades of the band’s history. “Cosmic Bob” and The Lost Gonzo Band have played Austin City Limits, Kerrville Folk Festival, Willie Nelson’s 4th of July Picnic, South by Southwest Music Festival and Austin Aqua Fest, helping to bring Austin national recognition as THE place for live music, earning the city the label The Live Music Capital of the World. The list of musicians and bands that Bob has played with is inexhaustible, including Jerry Jeff Walker, Michael Martin Murphey, Ray Wylie Hubbard, Willie Nelson, Leon Russell, and Garth Brooks. Bob has served as Chairman of the Austin Music Commission, on the Board of Directors at the Texas Music Museum, and still lives in and works from Austin with The Lost Gonzo Band, Cowboys and Indians and on his solo projects. Gypsy Alibi, Bob’s 2011 release, won the 2011 Texas Music Award for Best Album of the Year. In January 2016, Livingston was inducted into the Texas Music Legends Hall of Fame, and on October 3, 2018, he was inducted into the West Texas Music Walk of Fame.

I’m positively thrilled to be sharing as stage with both men, amazing musicians and dear friends, in such an intimate setting as we bring blues and poetry together. And, as always, my deep gratitude to the incomparable Pattie Traynor, wizard sister with the camera, for these photos! Bob, Don and I are grateful to Pattie and Mary O’Connell, joint owners of Turnstyle, for hosting us for the first of many shows together over the years.

LISTEN UP: The Voice Of Young New Mexico