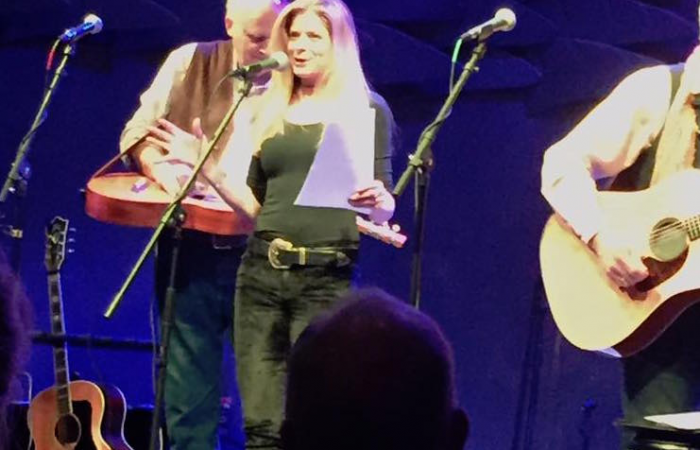 Beautiful people, what a night we had.

I was so excited to join master musicians Bob Livingston, founder of the legendary Lost Gonzo Band in Austin, Texas and Don Conoscenti, multi-instrumental singer-song writer and composer, for a new combination of 12-Bar Blues and poetry, especially after our ONLY rehearsal on Saturday afternoon before our show at Taos Mesa Brewery in Taos, New Mexico.

Bob, Don and I have done several of these sets over the past seven years, with Bob and Don playing the blues and me performing poems by Rumi and original poems of my own. Before this past Saturday night, we had never done any of PRINCE‘s songs together, but all I could think when we talked about it last week before the show was, Why not? As Prince so famously said: Maybe we can do the twirl. After our one rehearsal together of several of Prince’s songs that we chose to perform in honor of him and his passing on April 21st, the three of us were joined by two other amazing musicians, Don Richmond and Jim Bradley, both members of the favorite Southwest band, The Rifters, for the set. Despite the palpable sadness in the room over the loss of Prince, we had a great time together, alternating between Prince songs, poems by Rumi and poems of mine from my forth-coming book.

When I left the stage, another musician who was there to see the show, stopped me at the bottom of the stage steps and asked me, “What’s it like to be the only woman on stage with four remarkable male musicians hanging on your words?” And I told him the truth: It’s amazing and almost ridiculous fun to play off of each other between the poems and the music and, more than anything, it’s an honor for me.

Bob Livingston has been touring internationally for almost 50 years, with over 25 international tours sponsored by the United States State Department, as an Ambassador of American Music, promoting cultural understanding through music. Bob is one of the key figures of the Cosmic Cowboy Outlaw and Progressive Country music movements that largely established the Austin, Texas music scene of the early 1970’s. A founding member of The Lost Gonzo Bandwith Gary P. Nunn, Bob has stayed with the band as it came to include Jerry Jeff Walker, Michael Martin Murphy and Ray Wylie Hubbard, among other musicians, over the 4 decades of the band’s history. “Cosmic Bob” and The Lost Gonzo Band have played Austin City Limits, Kerrville Folk Festival, Willie Nelson’s 4th of July Picnic, South by Southwest Music Festival and Austin Aqua Fest, helping to bring Austin national recognition as THE place for live music, earning the city the label The Live Music Capital of the World. The list of musicians and bands that Bob has played with is inexhaustible, including Jerry Jeff Walker, Michael Martin Murphey, Ray Wylie Hubbard, Willie Nelson, Leon Russell, and Garth Brooks. Bob has served as Chairman of the Austin Music Commission, on the Board of Directors at the Texas Music Museum, and still lives in and works from Austin with The Lost Gonzo Band, Cowboys and Indians and on his solo projects. Gypsy Alibi, Bob’s 2011 release, won the 2011 Texas Music Award for Best Album of the Year. In January 2016, Livingston was inducted into the Texas Music Legends Hall of Fame, and on October 3, 2018, he was inducted into the West Texas Music Walk of Fame.

My great gratitude to Bob and Doncon for another set together, to Don and Jim for joining us, and to Prince, whose music and vision, irrepressible spirit and enormous generosity, unflinching activism and ceaseless service has given the world so much blessing, example and inspiration. One of my favorite quotes of his is:  You are either here to enlighten, or you are here to discourage.

I hope Prince has taken to the stage in the vast mysterious, as outrageous as ever, incomparably draped in lace and purple velvet, playing that guitar, as badass as anyone who ever flew a little above the ground among us.

CONJURING (or I LOOKED FOR THE WORDS TO TELL YOU)

I looked for the words to tell you. I want you to come to me,…

Be the change you wish to see in the world. – Gandhi I had this quote…