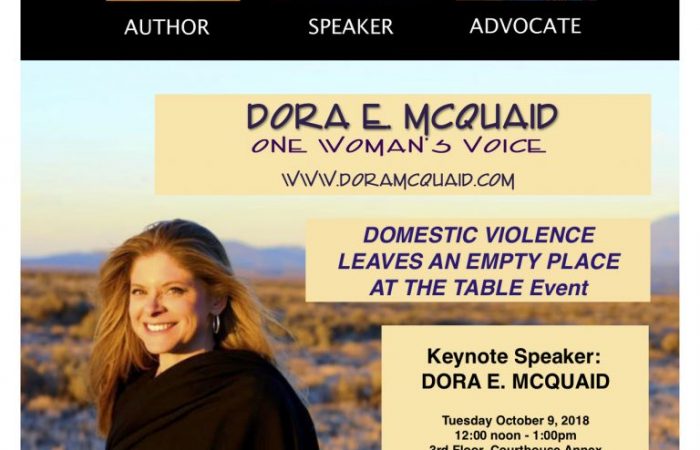 I will be returning to Centre County, Pennsylvania to serve as the Keynote Speaker for this Domestic Violence Awareness Month event sponsored by Centre Safe (formerly the Centre County Women’s Resource Center) and Centre County District Attorney Bernie Cantorna. 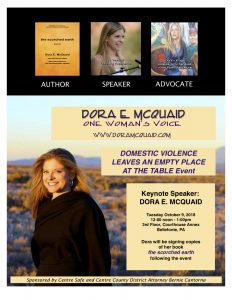 I’m honored and excited to be returning to Centre County to once again share my work with the members of the extended community and to honor local victims and survivors of domestic violence, as well as the Centre County organizations that are dedicated to assisting and supporting survivors in healing and reclaiming their lives, as I did for the many years that I taught at Penn State and made State College my home.

District Attorney Bernie Cantorna will also speak during this public event and the Centre County Commissioners will declare October as Domestic Violence Awareness Month. Anne Ard, Executive Director of Centre Safe, and Dawn McKee, Centre Safe Special Projects Coordinator, will discuss resources available for survivors of domestic and sexual violence and the powerful public exhibit of the Centre County An Empty Place at The Table, honoring the Centre County community members whose lives were cut short in domestic violence-related homicides since 1998 with personalized place settings showing that “domestic violence leaves an empty place at the table”. McQuaid will do a book signing of the scorched earth following the event inside the courthouse.

Centre County is the county in which Penn State/University Park Campus is, where I did both my undergraduate and graduate programs and then served as faculty in the Department of Communication Arts and Sciences from 1999 through 2006. In honor of my activism addressing domestic and sexual violence, my image replaced that of Jerry Sandusky, former Penn State football coach and convicted pedophile, in the Inspiration Mural following his conviction in 2012. Given my history at Penn State and within the State College and University Park campus communities, the opportunity to return to honor survivors of domestic and/or sexual violence is always an honor. This particular event is even more meaningful for me as it is being held in the SAME courthouse where I took my abuser to court decades ago for a Protection From Abuse order and the same courthouse where Jerry Sandusky was convicted. This is the first time I will have the opportunity to speak at this particular courthouse, and to also offer a book signing of my book, the scorched earth, which I wrote after confronting my abuser, fighting for my safety and healing from the history of violence I had known to that point in my life. To be able to return to this courthouse to honor other survivors decades after I confronted my abuser there is an honor beyond words.

Please come join us and show your support of survivors of domestic violence.

Wilson, ArkansasDora travels to The Delta to speak and read from her book, the scorched earth.…

DORA TRAVELS TO LOS ANGELES FOR THE FLAME, FIST AND DANCE TOUR! WITH PAT PAYNE & SANDRA HUNTER AKKA B.

“I have been flame, fist, dance and spin…”From Dora’s poem, Homecoming, in her collection of poems, the…