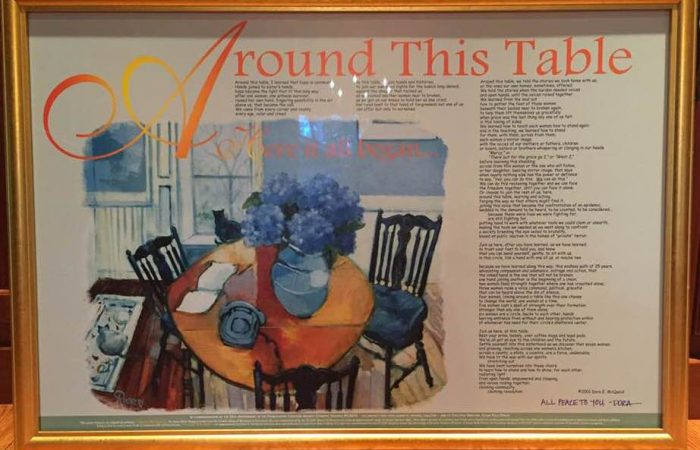 When I got out of the violence many years ago, one of the ways I rebuilt my life was to remind myself every morning in my writing that the only thing I needed to do that day was to take the next step, day by day, step by step. I did not want to live by the limitations of my past but wanted instead to live by the steps available to me into the future that was possible. For twenty years, I’ve lived step-by-step, building a life that has been based on what is possible, regardless of the violence that came before.

And every now and again, I’m confronted by the trajectory of those steps and how they have gone on beyond me, like now, when the poem I was commissioned to write for the 25th Anniversary of Pennsylvania Coalition Against Domestic Violence (PCADV), is once again framed for a public venue to honor survivors. My original poem, Around This Table, that I wrote to fulfill that commission and to honor the history and founding members of PCADV, especially it’s original founder and Executive Director Susan Kelly-Dreiss, was developed into this poster as shown here. We unveiled the poster in Harrisburg during PCADV’s 25th Anniversary Celebration on October 3, 2001, and committed the sales of the poster to The Memorial Fund for women murdered in domestic violence-related homicides, which those sales have benefited since 2001.

This signed, framed copy of my poem will be given to Bernie Cantorna, District Attorney of Centre County, Pennsylvania on Tuesday October 9 as part of the Domestic Violence Awareness Month event for which I am serving as Keynote Speaker, Domestic Violence Leaves An Empty Place At The Table, cosponsored by D.A. Cantorna’s office and Centre Safe. This signed copy will then hang in the waiting room of his office, so that survivors of Domestic Violence waiting to meet with District Attorney Cantorna will know that they will be heard, believed, and supported as the D.A. Cantorna and his staff work together to pursue justice on their behalf while other programs within the community, including Centre Safe, work together to help that survivor reclaim themselves and their lives against the violence they have endured. I’m deeply honored to know that my poem will greet survivors in the District Attorney’s office to remind each one of them that they are not alone.

For 17 years, where lives could not be saved, my voice through this poem has helped to honor those lives that were lost, and I’m standing here crying, overwhelmed in realizing once again how blessed I am that all of these steps across the span of over twenty years have led me to right here, today.

AN EVENING WITH CRISIS CENTER NORTH AT THE CARNEGIE
Photos from my ongoing speaking and book tour with my book, the scorched earth, continue to come in. Here is one of me taking the stage at the Andrew Carnegie Music Hall and Library in Pittsburgh for the benefit event…
FROM PRINCESS BUTTERCUP TO GENERAL ANTIOPE

It’s been a little over a week since I saw the new movie Wonder Woman,…