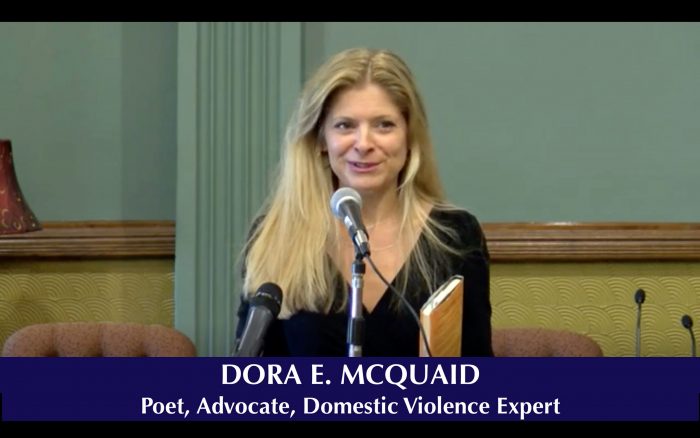 “There is always hope.”

The last time I had been inside the Centre County Courthouse was decades ago, when I took my abuser to court, to obtain a Protection From Abuse Order against him in an effort to protect myself from further violence at his hands. As strange as the universe’s sense of interconnection can so often be, this courthouse is the SAME courthouse where Jerry Sandusky, former Penn State Football Coach and pedophile, was convicted of 45 counts of child sexual abuse the day before my image replaced Sandusky’s in the Inspirations Mural at Penn State. My image was chosen by Muralist Michael Pilato and The Public Art Academy to honor my activism on behalf of survivors of both domestic and sexual violence during my many years at Penn State as faculty member, as well as as an undergraduate and graduate student at the University Park campus prior to my faculty post there. Even more strange and interconnected is the fact that BOTH Jerry Sandusky and my former abuser hired the same defense attorney to represent them in the SAME courthouse, for criminal court proceedings, many years apart.

To return to THIS courthouse as the Keynote Speaker for THIS event was not only and honor but also a moment of acknowledgment for me of the woman I was when I first entered that court to stand up for myself to the woman I have become who has now stood up for decades on behalf of other victims and survivors.

The full recording of that event, Domestic Violence Leaves An Empty Place at The Table, is now available to view. This recording includes my Keynote Speech, as well as the speeches by Dawn McKee and Anne Ard of Centre Safe and Bernie Cantorna, Centre County District Attorney. I extend my deep gratitude to District Attorney Bernie Cantorna, Centre Safe Executive Director Anne Ard and Centre Safe’s Special Projects Director and my dear friend, Dawn McKee for the honor of their invitation to serve as Keynote Speaker and their sponsorship of such a powerful event. I’m also grateful to C-NET for their live broadcast of this event across the state of Pennsylvania, as well as to everyone who made this event, and the moment it represented, possible. The Press Release is available HERE.

Watch this event at Centre County Court House, including my speech, here:
Domestic Violence Leaves An Empty Place at The Table.

If you are in need of support or assistance regarding issues of domestic violence or intimate partner violence, please refer to the extensive listing of International Resources for Survivors I created for victims and survivors of both domestic and sexual violence. As a survivor myself, please allow me to remind you that you are not alone. It is not your fault. You will be believed, and supported. And you can heal and reclaim your life with the support and assistance available specifically designed to be present with you as you do.

PRAYERS FOR PEACE FROM SHIPROCK SUNDANCE

I’m sending out prayers for peace from the border of Arizona and New Mexico, with…