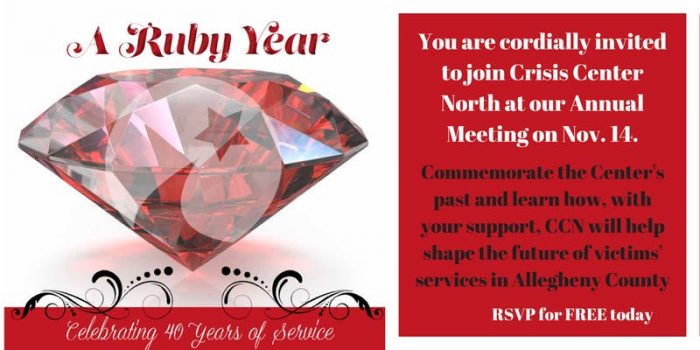 Poetry and activism bring me back to Pennsylvania once again. I am honored to have been commissioned to write a poem celebrating the 40th Anniversary of Crisis Center North in Pittsburgh, which will be unveiled during the 40th Anniversary Celebration on Wednesday, November 14. We are days away from this event, where I will deliver the poem I was commissioned to write to commemorate this anniversary. Crisis Center North has helped save and restore over 80,000 lives, one of many accomplishments to celebrate. Please join us for a night of celebrating the 80,000 lives that Crisis Center North has helped to save and restore since 1978.

FROM CRISIS CENTER NORTH:
“This year marks the 40th Anniversary of Crisis Center North, and in those 40 years, the Center has served and provided more than 80,000 victims of domestic violence with free, life-saving advocacy, counseling, and educational services. Without the generous support of caring community members and groups, none of our client’s successes would have been possible. As such, we would like to cordially invite you to CCN’s 40th Annual Meeting on November 14, 2018 6 to 9 pm, at the DoubleTree Cranberry, to commemorate the past and to look toward a brighter future for victims.

Experience the words of Dora E. McQuaid, the award-winning poet, activist, speaker, and teacher herself, during Crisis Center North’s 40 Anniversary Annual Meeting event, which will feature the unveiling of new original work by Dora, a commemorative poem written to honor the 40th Anniversary of Crisis Center North, as well as a book singing with Dora of her groundbreaking book, the scorched earth.

The event will also include:
· A panel of past and present CCN leaders to discuss the past, present, and future of the Center and victims’ services in Allegheny County.
· Recognition of community members and organization committed to the cause of domestic violence through presentation of the Center’s annual Northern Star Awards.”

This event is FREE and open to the public.
Event Press Release is available HERE.
Event Details and RSVP HERE.

Come join us in celebrating 40 years of saving lives together in Pittsburgh.

All peace to each one of you today.  Dora

Dora will be on tour with her collection of poems