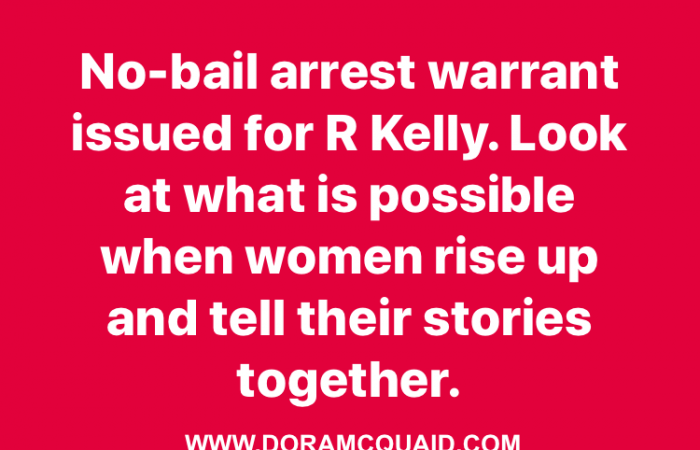 At least 3 of the alleged victims have been confirmed as underage, older than 13 but younger than 17 at the time of the alleged crimes in which R Kelly performed sexual acts with them. The age range of the fourth victim was not listed in the indictment.

R&B Singer R Kelly has evaded justice for decades, and yet the coordinated efforts of his survivors, Lifetime Television and the campaign, Mute R Kelly, have worked together to continue to spotlight R Kelly and his alleged abuses and crimes. Mute R Kelly has been pivotal in these efforts.

From the MUTE R KELLY website:
“We have come together to call for a worldwide financial boycott, a “mute”, on R&B singer, Robert “R” Kelly, due to his 25 year history of sexual, physical and emotional abuse allegations.  While he hasn’t been found guilty in a court of law, the evidence is overwhelming that he has created an uninterrupted pattern of sexual violence in the African American community that must be stopped.  If the court system is unable to protect our young Black women and girls, we must step forward to do so ourselves.”

A NO-bail arrest warrant being issued for R Kelly shows us, once again, what becomes possible when women rise up and tell their stories together.

SAY HER NAME OUT LOUD
The link to this article, Her Name Was Reeva Steenkamp, written by Kat Lister for Huffington Post UK, was just sent to me and I had to take a moment to share it, with deep gratitude to Ms. Lister for her courage…
YOUR BOUNDARIES ARE NOT THE PROBLEM

IN HONOR OF ALL SAINTS DAY AND THE ANCESTORS AMONG US.

The moon is 91 percent illuminated, on her way to fullness on Friday night. There…