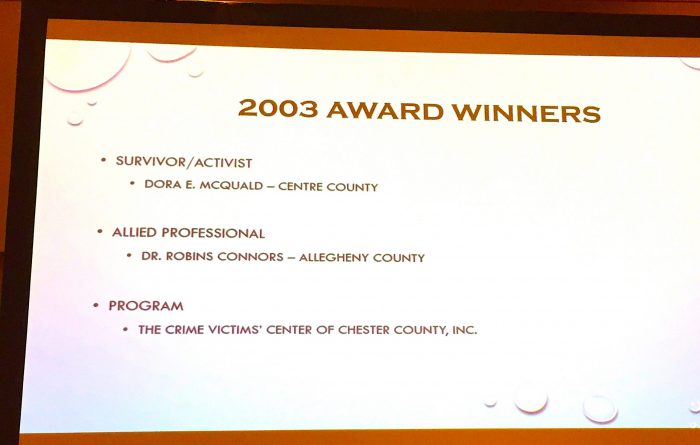 The Pennsylvania Governor’s Pathfinders Awards Ceremony was held in Harrisburg today. A friend sent this photo to me via text, telling me that past winners were acknowledged today as part of the ceremony, with my name listed for the 2003 award. I had another moment of being almost stunned by how my life has unfolded, where it and my own choices have led me, and where it is leading me, even now. We’ve all been inundated over the last 48 hours with appeals for Giving Tuesday, and since I received this photo today, I’ve been thinking of the countless people and programs that supported me over the years, and how their presence and belief in me helped me to make the choices I made, to use my voice, to have enough hope to believe that change is possible, and enough love to show up and try to be part of that change.

When my dear friend Dawn McKee nominated me for the 2003 PA Governor’s Award, I told her I didn’t need to win it, that being nominated was more than enough for me. I’ve come a long way from that moment to this one, and I land on gratitude as often as I can for how my own story unfolded, when it might have unfolded so differently. On Giving Tuesday, when my own efforts were included today in the long line of people who have stood for change and hope in Pennsylvania, I want to simple ask that we acknowledge not only the Non-Profits that work so hard to make our worlds better, but the people whose presence make our own presence and efforts more possible. Thank you to each one of you who has offered your support over the years, who believed in me and stood with me as I learned to stand for myself and for others, as well. Today is Giving Tuesday, so saying thank you for all of the giving feels right to me. I hope you have people in your life who believe in you enough to make you want to show up and offer the best inside of you out into this world so in need of our best.

Love and grace, and gratitude, to each one of you beautiful people.
Dora

Early voting for the US election opened in my community two days ago. To ensure…