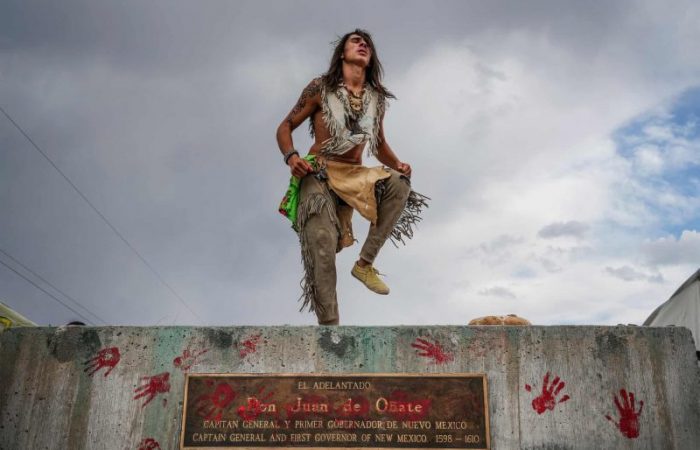 “Than Tsídéh, 19, of the Ohkay Owingeh Pueblo dances on the empty platform where a statue of Juan de Oñate was removed.”
Photograph: Gabriela Campos for The Guardian, in the June 24, 2020 article by Samuel Gilbert, Protests target Spanish colonial statues that ‘celebrate genocide’ in US West

I had to see for myself that it was gone, the 12-foot statue of Juan de Oñate y Salazar, Spanish conquistador from New Spain, the colonial governor of the province os Santa Fe de Nuevo México who ordered the amputation of the right foot of every male member over the age of 26 of the Acoma tribe along with the sentence of 20 years of servitude of the survivors of the Acoma Massacre of 1599, in which 800 to 1,000 tribal members were killed and the Acoma Pueblo destroyed. Oñate’s statue at the Visitor’s Center was removed in Alcalde, New Mexico last week after generations of tension and outrage over its presence in the face of his impact over 400 years ago and its legacy of trauma and oppression.

Following the removal of the statue of Oñate, 19-year old Ohkay Owingeh tribal member danced and sang on top of the platform after Oñate’s statue was removed, honoring his ancestors as shown above. It was windy and hot, and the only sound was the traffic rolling north on the road behind me as I stood before the empty platform that held his statue for years, minus his right foot for a brief period in 1998 as a group of people removed it from the statue in retaliation, and I thought yet again, what an astonishing moment we are living in.

This moment we are living, right now, is lifetimes in the making."Rosa sat so Ruby…

The sky is wide and forgiving.There were leaves and grass in my hairand a different…