Dora E. McQuaid is descendant of traveling gypsies, Irish Golden-gloved boxers, and strong women, whose stories and the telling of them prompted her lifelong fascination with the written and spoken word. Dora continues her family tradition of using the personal story to explore memory and conjecture, culture and community, and the connections between the private and the political. Her work embodies the intersections between the arts and activism, service and empowerment.

Dora’s unique blend of art, emotion and service has earned her multiple literary and service honors and awards. To honor her activism addressing sexual and domestic violence, Dora’s image replaced that of former Penn State football coach and convicted pedophile Jerry Sandusky in the Inspiration Mural by artist Michael Pilato near Penn State in 2012. In 2018, Dora’s lifetime achievements were acknowledged by her induction into the Wall of Honor by the Unionville – Chadds Ford School District in Chester County, Pennsylvania, where Dora attended middle and high school. Gargoyle Literary Journal nominated Dora’s poem, Tunnel of Love, for a 2014 Pushcart Prize. Dora was also honored as one of the Remarkable Women of Taos, New Mexico during the 2012 celebration of women whose lives and creative spirits have influenced the Northern New Mexico community. In 2011, Dora was awarded the New Mexico Woman Writer’s Fellowship by A Room of Her Own Foundation. Dora’s efforts also garnered a 2003 Pennsylvania Governor’s Pathfinder Award, recognition by the Pennsylvania Senate and a Vagina Warrior Award from the Penn State cast of Eve Ensler’s play The Vagina Monologues, all while serving as faculty at Penn State between 1999 and 2006, among other honors. She has also been awarded several Poet-In-Residence and Artist Fellowship positions with programs including The Harwood Museum of Art and The Helene Wurlitzer Foundation in Taos, New Mexico, among others. 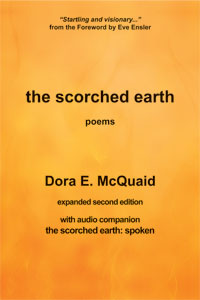 Dora’s groundbreaking first collection of poems, the scorched earth, and its audio companion, the scorched earth: spoken, were reissued as an Expanded, Second Edition by award-winning Baskerville Publishers in 2015, with the Foreword written by Eve Ensler, Tony Award-winning playwright of The Vagina Monologues and Founder of the international V-DAY Foundation and the One Billion Rising global event. This collection documents Dora’s journey from victimization to survivorship, through healing from a history of both sexual and domestic violence into empowerment and advocacy as an award-winning poet, activist, speaker and teacher. In the Foreword, Eve Ensler calls the scorched earth “…startling and visionary.”

Dora performs, speaks and teaches internationally in venues as varied as men’s and women’s prisons, justice and outreach programs, political rallies and community events, universities and high schools, churches and shelters, as well as television and radio programs and professional and academic conferences. She collaborates internationally with an array of other artists and activists, ranging from writers, poets and performance artists, to musicians, songwriters and visual artists working in a wide variety of mediums, including the pioneering Ekphrasis poets and artists of Taos, New Mexico.

Dora serves as a member of the Board of Directors of Sage Institute for Creativity and Consciousness and The Council for Hope and Healing, which she co-founded in 2012 with a group of international artists and activists to foster community development and empowerment through the Arts, as well as on the Advisory Board of Paws for Empowerment Victim-Assistance Canine Advocacy Program with Crisis Center North, in Pittsburgh, Pennsylvania. Dora also serves as consultant and expert witness in sexual violence legal cases, establishing offender liability and the short and long-term impact of violence on victims.

Dora’s work has been published in anthologies, films, plays, musical compositions, literary journals and magazines, required course readings and law enforcement training programs. The poem, Around This Table, which Dora was commissioned to write in 2001 for the 25th Anniversary of the Pennsylvania Coalition Against Domestic Violence, is available in poster form, which benefitted The Memorial Fund for Women lost in domestic violence homicides between 2001 and 2018. Kate Bogle’s short film, One Woman’s Voice, which documents Dora’s combined roles as poet, teacher and survivor/activist, is used nationally as a teaching and training tool in universities, prisons, recovery, outreach and judicial programs, among others.

GLORY, AND THEN SOME

This is how I let go.
This is how I let myself live free.
This is how I put the burden of generations down,
outside of me,
literally lay it down prone in the dust,
from which is gathered, beside me.
The dust is all the grief that came before me,
that fed this line of girl children until
our heads hung with the weight of a shame
that had nested in the multitude of us, growing.
This is how I raise myself up beyond the history
(it was her story, he forced his on her)

This is how I let go,
with that song that is not words but is
the sound of emotion, like the violin,
like the one egret, like the coyote at dusk:
a song without words but an upraising
all the same.
It is a glorious noise, this letting go,
the grief unfurled, the shame exposed.
There are no words for these emotions
and yet they live until we sound them go
with whatever tools our trades offer.
A voice in the song, the funnel rush
like fire when hope whirls in and expands,
when you believe yourself
enough
to love,
to be loved,
to be forgiven.

This is how I move on.
This is how I let myself live free.
This glorious noise,
stating and naming and claiming
and then, letting go.
This voice.
It is love that saves us,
makes us new again
and again.
Hope is power. Love is hope.
The joy in the song is the gratitude
to know hope (again),
once and for all.

And now, we thrive.

COPYRIGHT 1981 - 2021. ALL RIGHTS RESERVED.
NO materials on this website may be used in any way without the written permission of Dora E. McQuaid.
Back To Top
Safety Exit